One thing I’ve always wanted to do in Bangkok is the Bicycle Tour through the city and the surrounding area. Finally, on the last day of 2017, we managed to go on the 5-hours Bicycle and Boat Tour to discover Bangkok in a totally different way.

There are several agencies offering bike tours through Bangkok but we’ve chosen one we had been recommended: ‚Co van Kessel Bangkok Tours‘.

5 hours off the beaten path

Actually the tour doesn’t consist of 5 hours bicycling. One part of the tour is to join a long tail boat (with your bikes) to get out of the city faster.
The tour started in Bang Rak close to the Chao Phaya river heading to chinatown first. Instead of taking the big crowded streets our guide leaded us through the small alleys surrounded by local homes and small shops. 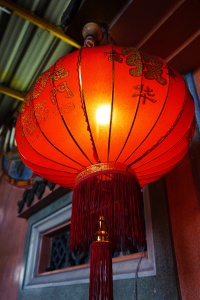 After discovering a beautiful Chinese temple we made our way through the alleys of the market in Chinatown. Everything you can image is available in huge numbers. Its a crowded, impressive place to see locals and tourists bargaining and shopping. As we did the tour on New Years Eve the place was actually not too busy. Many Thais in Bangkok leave the city for celebrating with their families in their hometowns in the countryside. Actually it was interesting and nice to see a quite face of Bangkok. Getting a nice ‚Sawasdi pi bih‘ from the people we were passing, wishing us a happy new year. That’s one reason I really like holidays like Christmas and New Years Eve. It feels like everyone knows each other wishing just the best for the start of the new year.

On the other side of the river

For most people there are not many reasons to cross the river to get to the other side. To be fair almost all of the famous sightseeing spots are on the Eastside of the river but the westside offers you a totally new impression of Bangkok. Our guide told us that the rental for an apartment is 30-50% cheaper there and things like food and clothes are so much more affordable. After crossing the river at Tharuea Kham Fak Ratchawong ferry station we discovered a local market and tried some fresh fruits as well as some coconut pancakes (I looooove those pancakes!).

Venice of the East 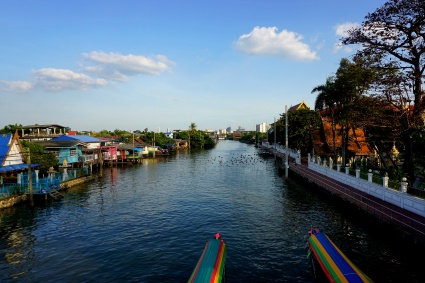 That’s how Bangkok is designated by some people. There is a huge canal system leading through the different neighborhoods of the city as well as to the surrounding areas. Traveling by longtail boat or water taxi is not only a cheap way through Bangkok it’s also faster and easier as there is no traffic like on the streets (but still the river and the canals are busy as well). They even have water locks because of the different water levels and most houses located at the canals have their own dock. Putting all our bikes on the longtail boat we enjoyed the 40 minutes ride to the region Bang Kruai.

‚Can this boat float?‘

Right after getting from the boat we were standing in front of an amazing temple (yes I’ve seen many temples but still there are special temples impressing me): a big temple standing on a huge boat. All over golden and even surrounded by water this temple is definitely different – even though it can’t float… 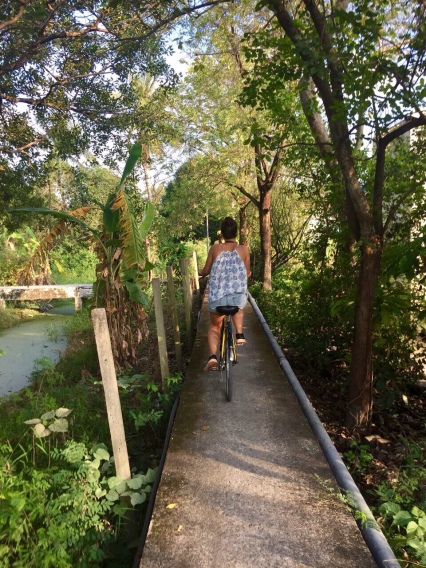 We took the bikes to a beautiful area crossing the canals on really narrow path – kind of a challenge not to fall in the water which seems to be quite likely to happen every now and then. This place felt like so far away from the big, noisy, restless city. Passing bunch of green plantations on our way to a cute restaurant at the canal to eat dinner. ALL YOU CAN EAT! The dishes were so delicious and we were starving so we didn’t stop until we were about to burst. On our 30 minutes boat ride back to the Bang Rak we were lucky to enjoy a beautiful sunset and the colors shining on Wat Arun while we were passing. 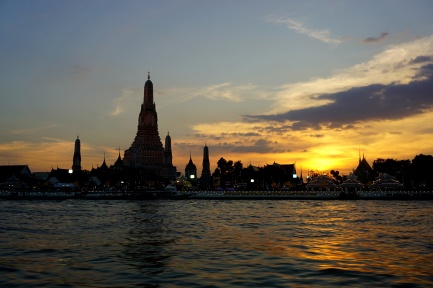 The tour is definitely not the cheapest activity in Bangkok but it’s soooo worth the money and time. Especially when you are not the first time in Bangkok or you’re staying for a while this is a perfect way to get to know the city better and in a special way.